President  Md. Abdul Hamid Advocate was born on 1 January, 1944 in Kamalpur of Mithamoin Upazilla under 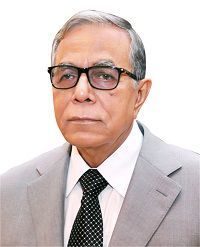 Mr. Abdul Hamid passed I.A. & B.A. from Gurudayal College of Kishoregonj and LLB from Central Law College under Dhaka University. After passing LLB, he joined Kishorgonj Bar as an advocate. He was President of Kishoregonj District Bar Association for 5 times during the period of 1990-96.

Mr. Abdul Hamid got involved in politics from his student life in 1959. While studying in the college he took leading part in anti-Ayub Movement in 1961 and was imprisoned by Pakistan Government for taking part in student movement. In 1963, he was elected as the General Secretary and in 1965 as the Vice-President of Student Union in Gurudayal College of Kishoregonj. Mr Hamid was the Founder President of Chatra League of Kishoregonj Sub-division in 1964 and also elected as the Vice-President of Chatra League of Mymensingh district in 1966-67. In 1969 he joined Bangladesh Awami League.

In the National Assembly Election of 1970, Mr. Hamid was elected as a junior most member from Mymensingh-18 Constituency. He took part in the Liberation War of Bangladesh in 1971 and acted as the Chairman of recruiting camp in Meghalaya in India. He also acted as the commander of the subsector of Bangladesh Liberation Force (Mojib Bahini). He was also Chairman of Muktijuddha Youth Reception Camp at Meghalaya during liberation war. In the National Election of 1973, he was elected as a Member of Parliament from Kishoregonj-5 constituency. In 1974, he was Vice-President of Kishoregonj District Awami League and from 1978 to 2009 the President of Kishoregonj District Awami League before being elected as the Speaker of 9th Parliament. In 1976-1978 Mr. Hamid was imprisoned by the then Government after the killing of the father of the Nation Bangabandhu Sheikh Mujibur Rahman.

Mr. Hamid visited many countries of the world. He visited USA, UK, Russia, Canada, China, India, Saudi-Arabia, Kuwait, Iran, Egypt, Singapore, Dubai, Abu-Dhabi, Thailand, Morocco, Mongolia, Gibraltar, South Africa, Namibia, Switzerland, Barbados, Korea, Hong Kong etc. to attend meetings, seminars, symposiums and conference as Member of the Parliament, the Deputy Speaker and Speaker of Bangladesh Parliament. He played a pivotal role in the Inter-Parliamentary Union (IPU) and in the Commonwealth Parliamentary Association (CPA) as a Member of the Sustainable Development Committee of IPU and as a Member of the Executive Committee of CPA respectively.

Mr. Md. AbdulHamid Advocate is an ardent social worker and has established a good number of schools, colleges, and madrashas in his constituency. He is the Life Member of Kishoregonj District Shilpakala Academy, Red Crescent Society of Kishoregonj Unit, Kishoregonj Rifle Club and Kishoregonj Press Club. He is also associated with many other institutions.

Mr. Hamid is married and father of three sons and a daughter. Reading books on history and constitutions of different countries is his favorite hobby. For his outstanding contribution in our Independence and Liberation War, Md. Abdul Hamid Advocate was conferred the Independence Award – 2013.

Mr. Md. Abdul Hamid sworn in of the office of the President of the People’s Republic of Bangladesh on 24 April 2013 as the 20th President.