Bangladesh, being located in the connecting point of South and SouthEast Asian countries, is home to the longest unbroken sandy sea beach.

Places to visit in Bangladesh for Tourists

The country has bountiful resources to offer to both local and foreigntravelers with its scenic beauty, ethnic diversity, unique cuisine,rich heritage and historical sites, profound religious sentiments andmuch more. One of the main country’s attraction is Cox's Bazar in thesouth-eastern corner of Bangladesh – pristine sandy beaches, coconutpalms, sunshine and tropical weather makes it an ideal holidaydestination. 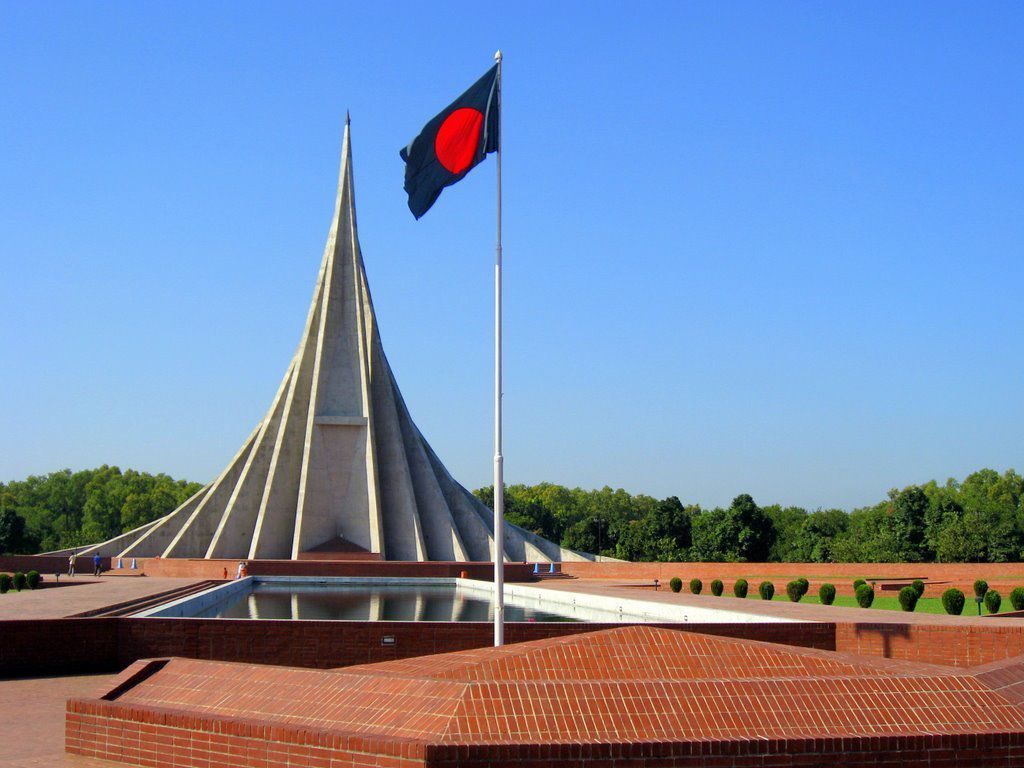 National Martyrs' Memorial is a monument in Bangladesh. In Bangladesh it is known as "Jatiyo Sriti Shoudho". It is the symbol of the valour and the sacrifice of those killed in the Bangladesh libaration war of 1971. It is built
with Concrete, but made of blood. It stands 150 feet tall, but every martyr it stands for stands so much taller. It is an achievement the dimensions of which can be measured but it stands for an achievement which is immeasurable. The monument is located in Savar, about 35km north-west from Dhaka.

The Shaheed Minar is a national monument in Dhaka, Bangladesh, established to commemorate those killed during the Bengali Language Movement demonstrations of 1952 in then East Pakistan.

On February 21 and 22, 1952, some students from Dhaka University and Dhaka Medical College and political activists were killed when the Pakistani police force opened fire on Bengali protesters who were demanding official status for their native tongue, Bengali. The massacre occurred near Dhaka Medical College and Ramna Park in Dhaka. A makeshift monument was erected on February 23 by students of University of Dhakaand other educational institutions, but soon demolished on February 26 by the Pakistani police force. 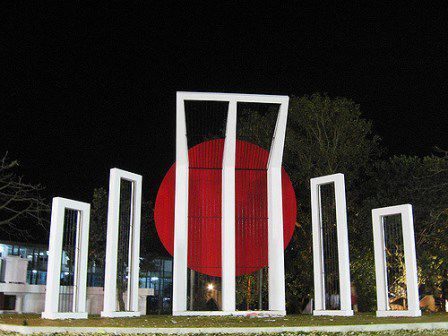 The Language Movement gained momentum, and after a    long struggle, Bengali gained official status in Pakistan  (with Urdu) in 1956. To commemorate the dead, the  Shaheed  Minar was designed and built by Bangladeshi  sculptors Hamidur  Rahman in collaboration with Novera  Ahmed. Construction was  delayed by martial law, but the  monument was finally  completed in 1963, and stood until  the Bangladesh Liberation  War in 1971, when it was  demolished completely  during Operation Searchlight. After  Bangladesh gained  independence later that year, it was  rebuilt. It was expanded in  1983.

Each  year events to mark February 21, Ekushey or Shaheed  Dibas (Martyrs' Day), are held at the Shaheed Minar premises.  Since 1999, 21 February is also recognized as International  Mother Language Day.

Jatiyo Sangsad Bhaban or National Parliament House is the house of the Parliament of Bangladesh, located at Sher-e-Bangla Nagar in the Bangladeshi capital of Dhaka. Designed by architect Louis Kahn, the complex, is one of the largest legislative complexes in the world, comprising 200 acres (800,000 m²). 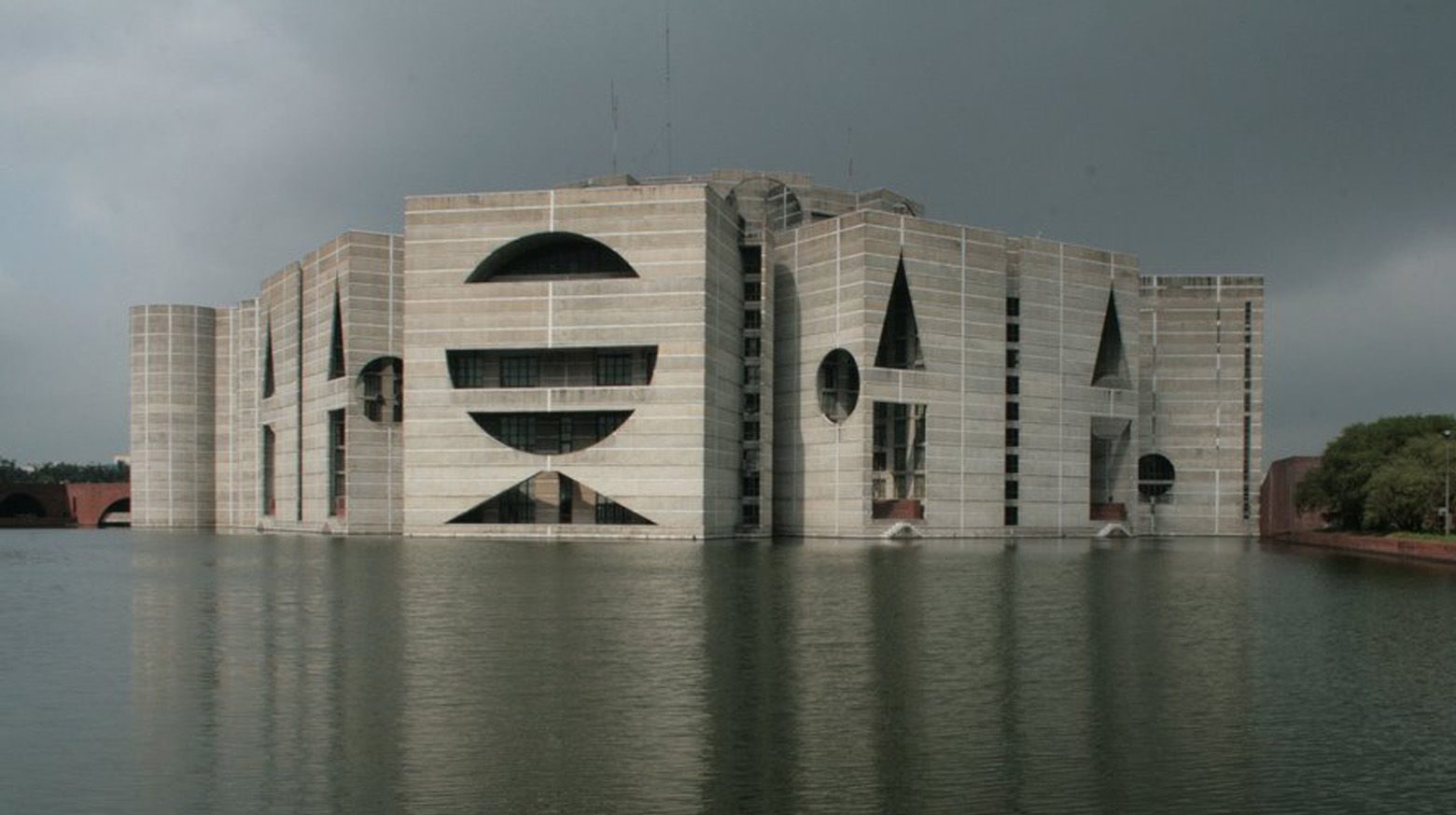 Although entrance to the Bhaban, the Main Building, is limited to authorized members of Parliament and staff, the Jatiyo Sangshad complex is open to visitors. North of the complex, across the Lake Road, is Crescent Lake and Chandrima Uddan . The two complexes together form a major attraction for tourists in Dhaka. The complexes are popular among joggers and skaters of Dhaka. The official Prime Minister's Residence is on the North West corner of the Mirpur Road and Lake Road crossing and is a five-minute walk from the Jatiyo Sangsad Bhaban. The area is one of the higher security zones of Dhaka.

The Complex can be accessed using any of the four roads surrounding it, however, the Manik Mia Avenue and Lake Road are the easiest approaches.

Cox's Bazar - the longest seabeach in the world.

Ffishing port and district headquarters in Bangladesh. The beach in Cox's Bazar is an unbroken 120  km sandy sea beach with a gentle slope, one of the world's longest. It is located 150 km south of the industrial port Chittagong. 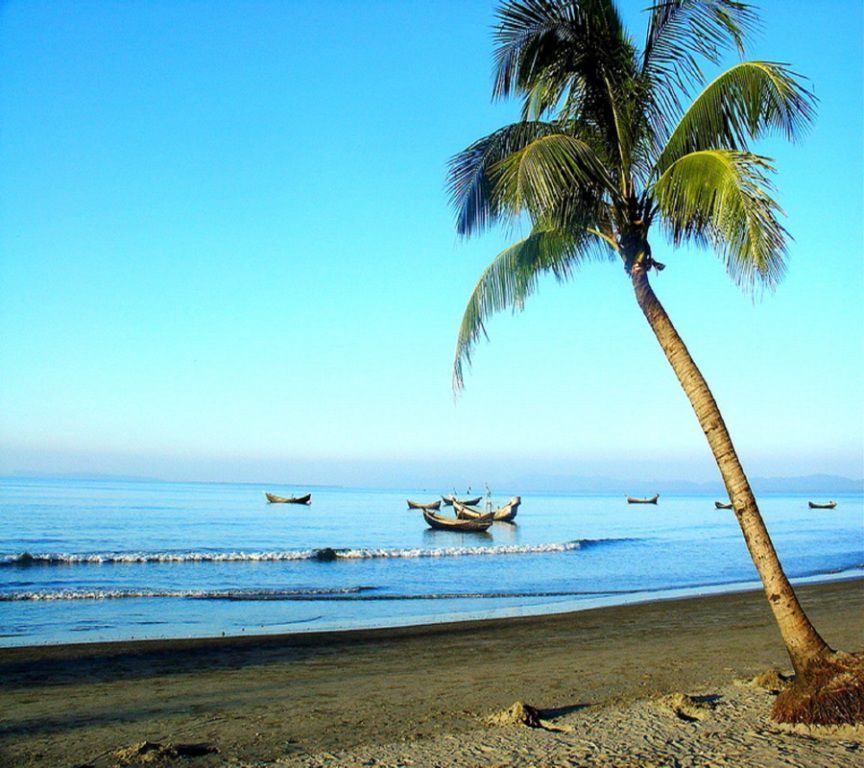 The modern Cox's Bazar derives its name from Captain Hiram Cox (died 1799), an officer of the British East India Company. Cox was appointed Superintendent of Palongkee outpost after Warren Hastings becameGovernor of Bengal. Captain Cox was specially mobilised to deal with a century-long conflict between Arakan refugees and local Rakhains. He embarked upon the task of rehabilitating refugees in the area and made significant progress. Captain Cox died in 1799 before he could finish his work. To commemorate his role in rehabilitation work, a market was established and named Cox's Bazar ("Cox's Market") after him.

Today, Cox's Bazar is one of the most-visited tourist destinations in Bangladesh. In 2013, the Bangladesh Government formed the Tourist Police unit to better protect local and foreign tourists, as well as to look after the nature and wildlife in the tourist spots of Cox's Bazar.

Sundarbans South, East and West are three protected forests in Bangladesh. This region is densely covered by mangrove forests, and is the largest reserves for the Bengal tiger. The Sundarbans National Park is aNational Park, Tiger Reserve, and a Biosphere Reserve located in the Sundarbans delta in the Indian state of West Bengal.

Chittagong is a fairly big, spread out town, and the largest international seaport in the country. Like Dhaka, the streets are filled with masses of rickshaws, though the city puts in a little more effort to keep its streets and sidewalks clean. Foreigners will notice a distinct increase in nuisances from beggars in certain intersections: for example, New Market Circle and the central Railway Station. The majority of the beggars are from other parts of the country such as Greater Mymensingh Region and Greater Noakhali area. They have migrated due to the fact that Chittagonian people are more prone to charity relative to other parts of the country. 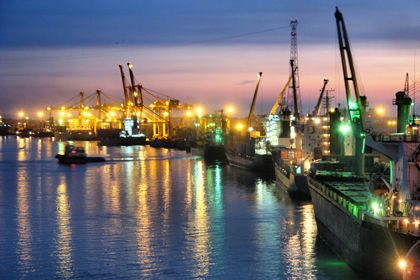 The busiest part of town is the area around the train station and Station Road, while things get a little more bearable as you move further north. GEC Circle is the intersection of Zakir Hossain Rd, O. R. Nizam Rd and CDA Avenue, about 3 km north of the train station, and is the center of middle to upper class life with a variety of shady restaurants and shopping.

Kuakata offers a full view of the sunrise and sunset from the same white sandy beach in the water of the Bay of Bengal. Locally known as ShagorKannya (Daughter of ocean), the long strip of dark, marbled sand stretches for about 18 kilometres (11 mi). The long and wide beach at Kuakata has a typical natural setting. This sandy beach has gentle slopes into the Bay of Bengal. Kuakata is also a sanctuary for migratory winter birds. 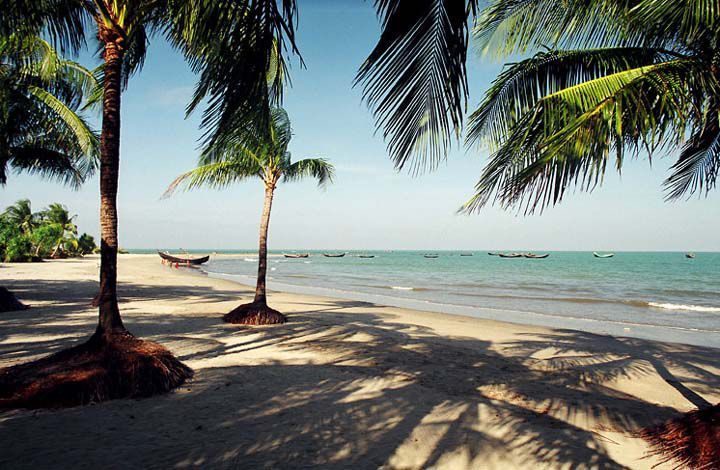 On the eastern end of the beach is Gongamati Reserved Forest, an evergreen mangrove forest and snippet of the original Kuakata. When the Rakhines settled in the area in 1784, Kuakata was part of the larger Sundarbans forest. However, the Sundarbans is now at a distance of one-hour by speed boat. As a mangrove forest, Gongamati, like the Sundarbans, offers some protection against tidal surges, however it too is being threatened by logging and deforestation. The best way to reach the forest is by foot or bike along the beach, where a flock of flag flying fishing boats can be seen trawling the coast. Choosing to visit Gangamati in the late afternoon is a perfect time to watch the sun cast shadows on the abstract exposed mangrove roots.

The area around Sylhet is traditional tea growing area. The picturesque Surma Valley is covered with terraces of tea gardens and lush green tropical forests. Srimangal is known as the tea capital of Bangladesh and for miles around one can see the green carpet of tea gardens on the hill slopes.

The area has over 150 tea gardens including three of the largest tea gardens in the world both in area and production. Nearly 300,000 workers are employed on the tea estates of which over 75% are women. Employers prefer to engage women for plucking tea leaves 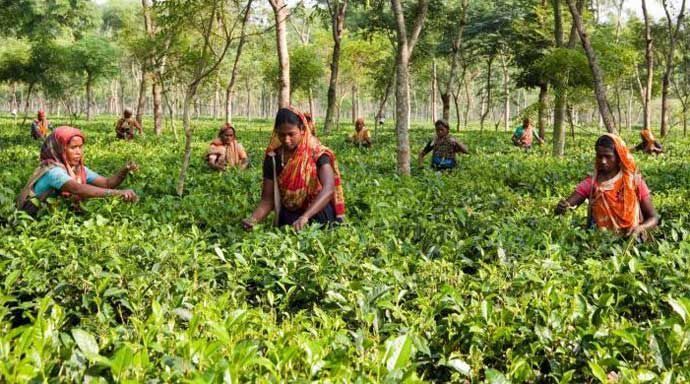 since they do a better job and are paid less than the men.

A visit to the tea plantation in Sylhet is a memorable experience.

The bungalows stand on huge beautifully maintained lawns and the service and lifestyle is pretty much unchanged.

60 Dome Mosque Bagerhat, Bangladesh
The Sixty Dome Mosque (more commonly known as ShaitGambuj Mosque or SaithGunbad Masjid) is a mosque in Bangladesh, the largest in that country from the Sultanate period. It has been described as “the most impressive Muslim monuments in the whole of the Indian subcontinent. 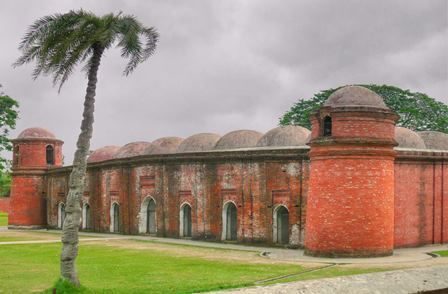 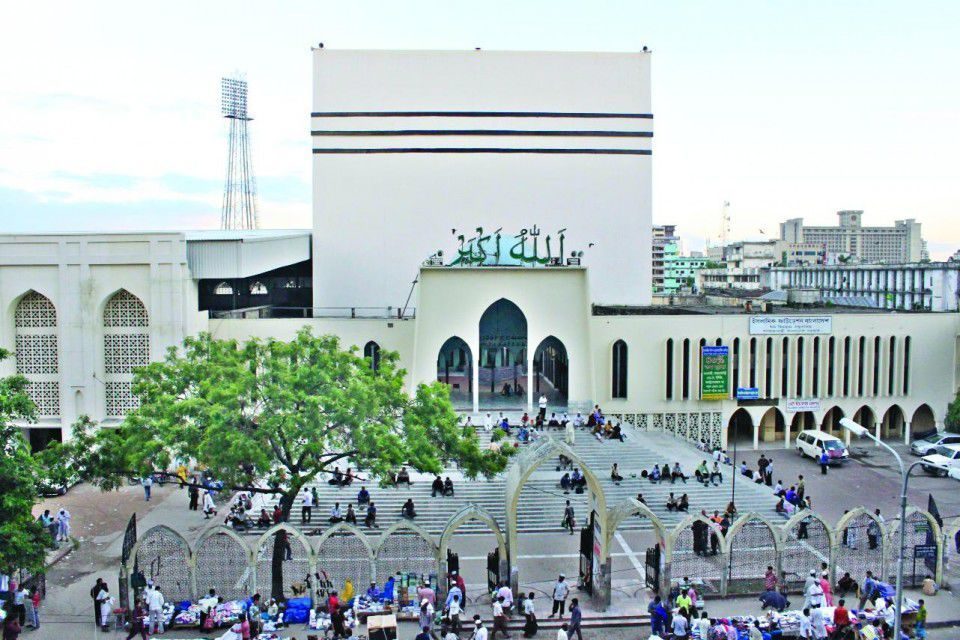 Star Mosque a beautiful Mosque located in Dhaka, capital of Bangladesh. It is the only building whose walls are decorated with mosaics of Chinese ceramics. Blue stars on a white background look great. Mirza Ghulam Pir a very respectable and influential personality of Dhaka constructed the star mosque in early 18th century. Architecturally perfect this Mughal Style Mosque displays five domes with hundreds of big and small twinkling stars on walls. The stars have been seen from the front and form far it appears as if shining above the surface of the earth. The interior western wall of the mosque was beautifully decorated. The star mosque is one of the most beautiful mosques of the Bangladesh. 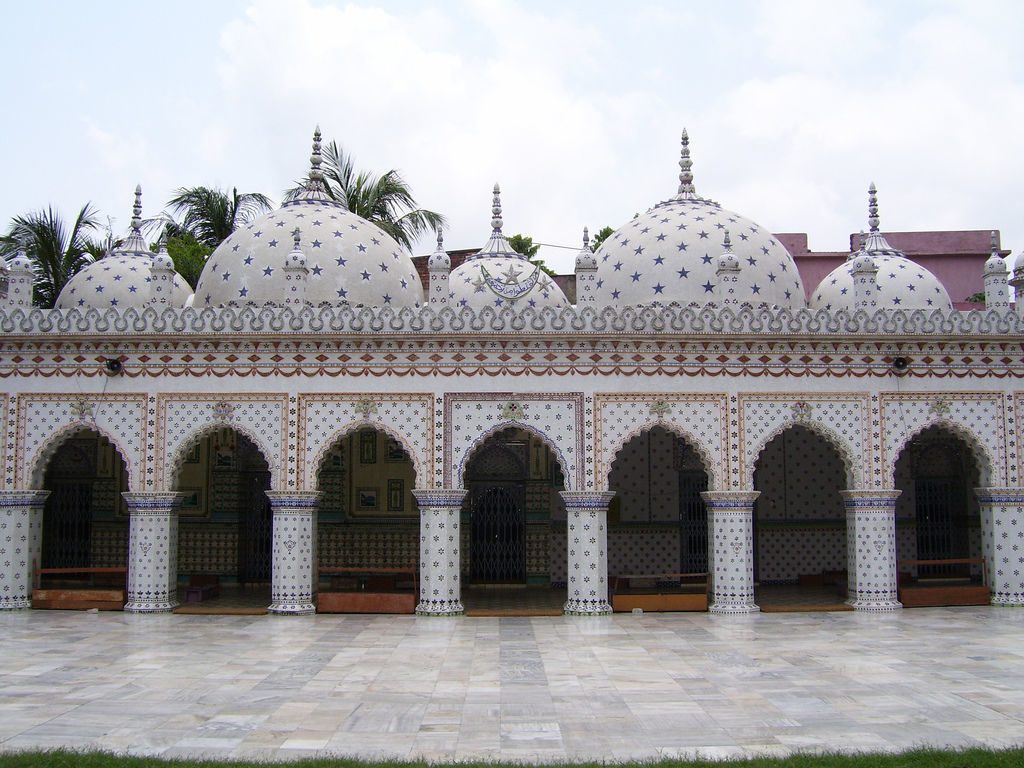 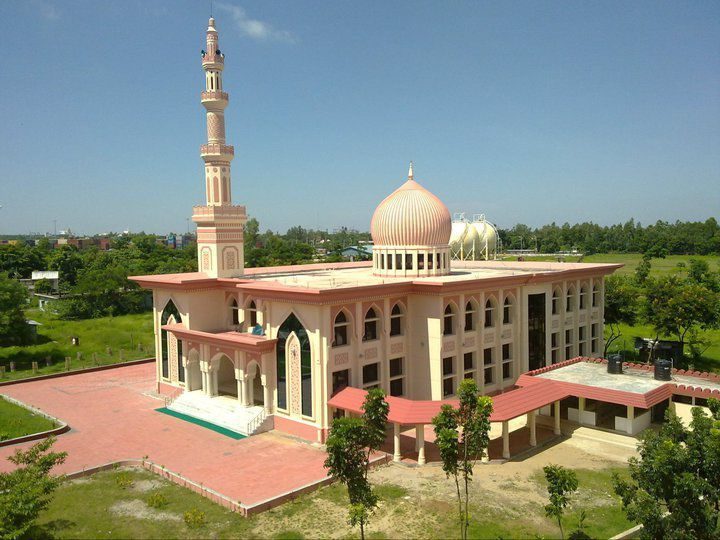 The Dhakeshwari temple was built in the 12th century by Ballal Sen, a king of the Sena dynasty, and many say the city was named after this temple. The current architectural style of the temple cannot be dated to that period because of the numerous repairs, renovations and rebuilding which have taken place over time. It is considered an essential part of Dhaka's cultural heritage. Many researcherssay that the temple is also one of the Shakti Peethas, where the jewel from the crown of the Goddess Sati had fallen. Although there is not enough historical context to establish this as a fact, researchers were directed to this site while trying to locate the particular Shakti Peetha. Since ages, the temple has been held in great importance. 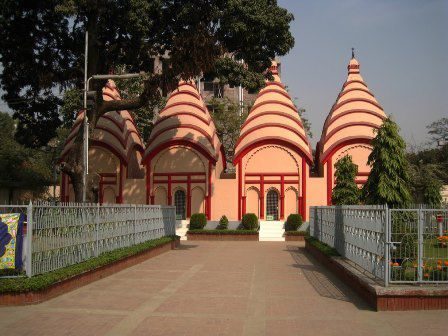 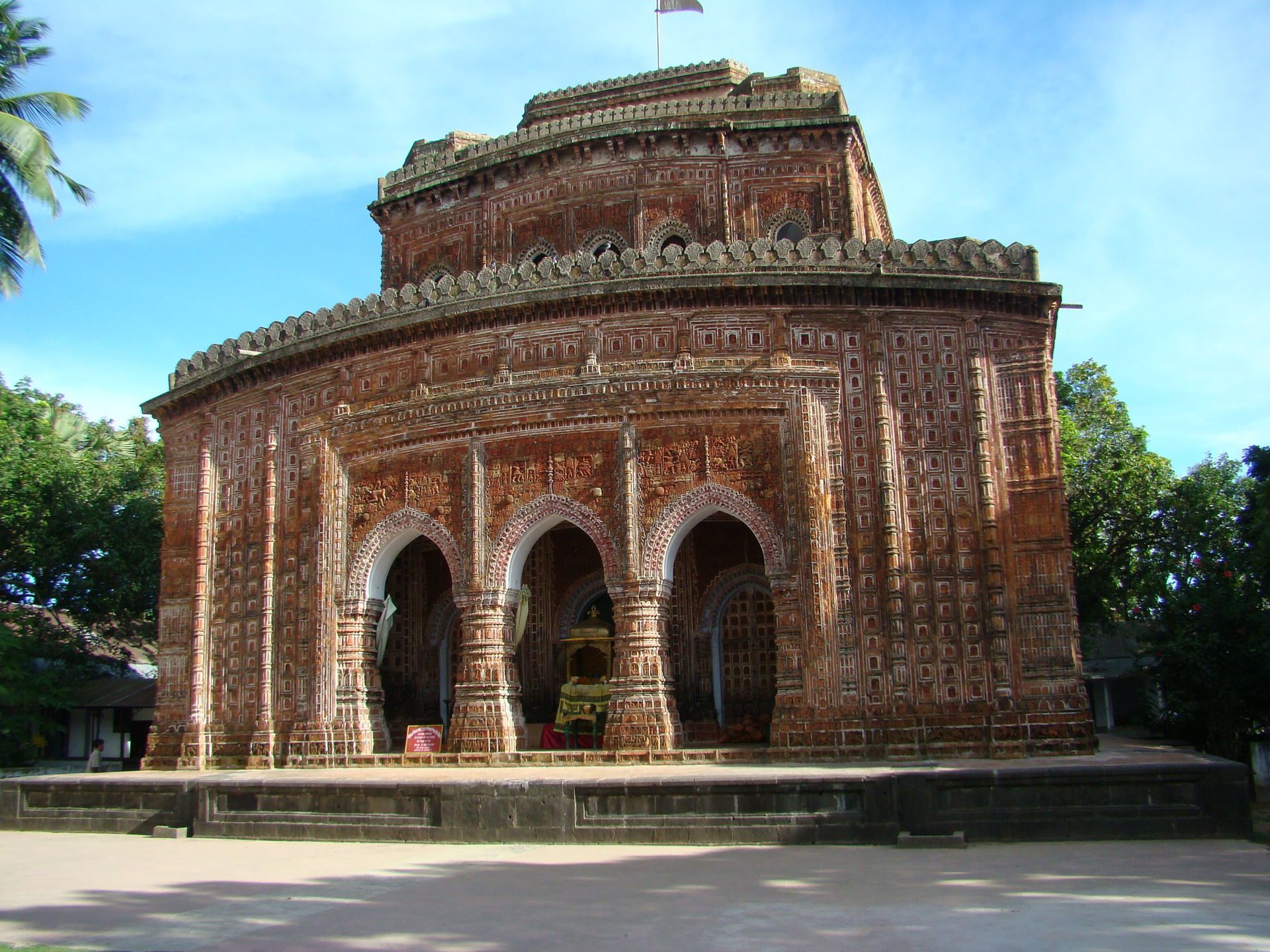 is one of the most magnificent religious edifices belonging to the 18th century. The temple belongs to the popular Hindu Kanta or Krishna and this is most popular with the Radha-Krishna cult (assemble of memorable love) in Bengal. This beautiful temple is dedicated to Krishna and his wife Rukmini. Built by Maharaja PranNath, its construction started in 1704 CE and ended in the reign of his son Raja Ramnath 1722 CE, during the reign of his son Maharaja Ramnath.[3] It boasts one of the greatest examples on terracotta architecture in Bangladesh and once had nine spires, but all were destroyed in an earthquake that took place in 1897.

Somapura Mahavihara in Paharpur, BadalgachhiUpazila, Naogaon District, Bangladesh is among the best known Buddhist viharas in the Indian Subcontinent and is one of the most important archeological sites in the country. It was designated as a UNESCO World Heritage Site in 1985. It dates from a similar time period to the nearby HaludVihara and to the Sitakot Vihara in Nawabganj Upazila of Dinajpur District. 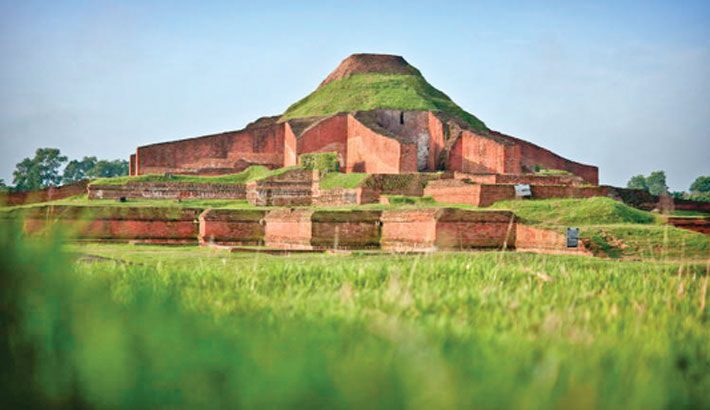 Armenian Church (also known as Armenian Apostolic Church of the Holy Resurrection) is a historically significant architectural monument situated in the Armanitola area of old Dhaka, Bangladesh. The churchbears testimony to the existence of a significant Armenian community in the region in the 17th and 18th centuries. 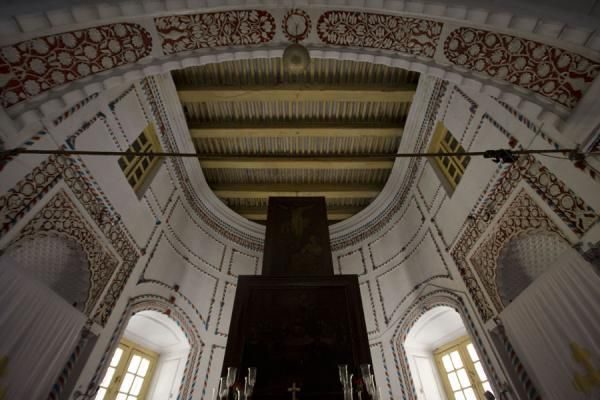 St. Thomas Church, Dhaka: The official name of this Anglican Church, better known as the St. Thomas Church, is the 'Church of Bangladesh'. Built in 1819, and consecrated two years later by Bishop Reginald Heber of Kolkata (Calcutta), the church premise was in an area of lush greeneries with the famous Bahadur Shah park in a stones throw distance on the south. 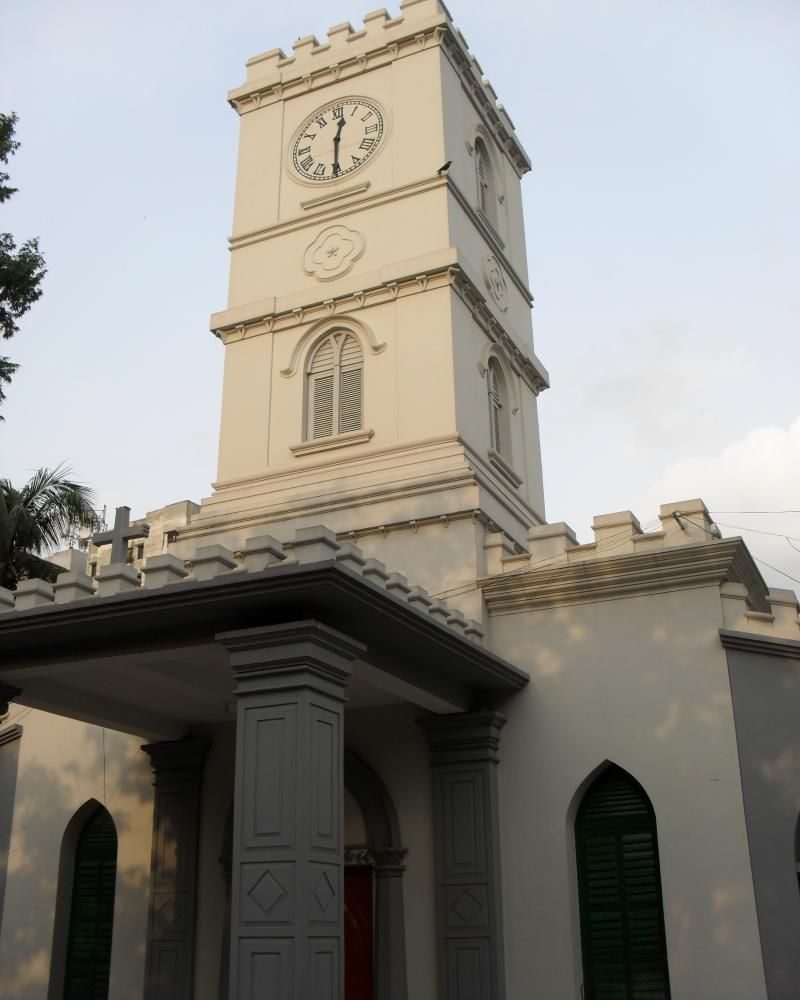 The St. Mary’s Cathedral also called Cathedral of the Immaculate Conception is the name given to a religious building belonging to the Catholic Church and is located in the Kakrail, Ramna road, in Dhaka, Bangladesh. It was established in 1956. 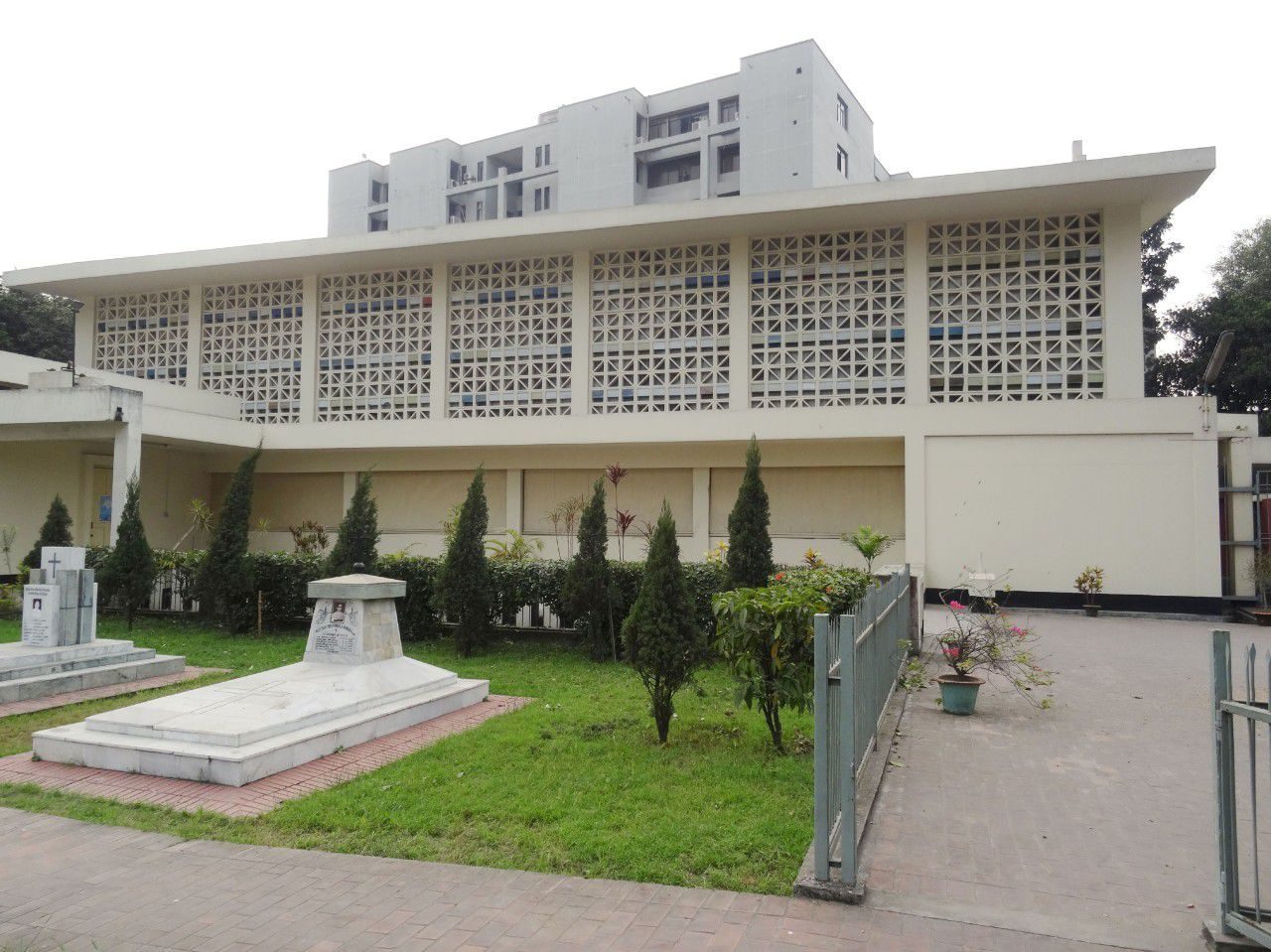